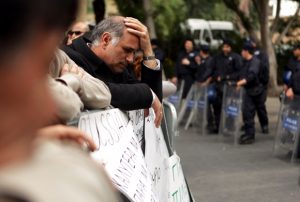 An employee of Cyprus Laiki (Popular) Bank reacts as he takes part in a protest outside the parliament in Nicosia on March 22, 2013. Cyprus is locked in “hard negotiations” with a troika of lenders to save the eurozone member’s banking system and economy in general from ruin, government spokesman Christos Stylianides said. AFP PHOTO/PATRICK BAZ (Photo credit should read PATRICK BAZ/AFP/Getty Images)